In 1964, the City of Corona purchased the assets of the Corona City Water Company, creating a municipally owned utility. But we were around long before then...

In 1886, developer Robert Taylor persuaded his partners Rimpau, Joy, Garretson and Merrill to form the South Riverside Land and Water Company. With his partners, Taylor raised approximately $110,000 to purchase roughly 12,000 acres of good agricultural land. Taylor, realizing the importance of water for the developing community, raised additional funds which were used to secure future water rights for the area. 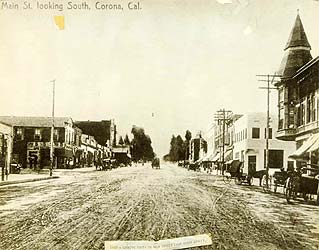 On July 13, 1896, residents voted to incorporate the community and to change the name from South Riverside to Corona. Corona is the Spanish word for crown, in honor of the City's circular Grand Boulevard. In 1897, the Corona City Water Company was incorporated for domestic water distribution.

authorized the City Manager to take all necessary steps to create and establish a municipally owned utility to provide services which now included electric service in addition to water and water reclamation. In December 2002, the department changed its name to the City of Corona Department of Water & Power to incorporate the increased services to the community.