Library service has been important to people in the Corona community for well over 100 years. The seeds of a public library date back to 1893 when Dr. Flora Gleason first talked about a reading room for local citizens. By the spring of 1895 she and the Women’s Christian Temperance Union had established a reading room in a rented room in the Gleason Building in downtown Corona. Between 1895 and 1900 the WCTU, the YMCA, and the Corona Woman’s Improvement Club were all involved in running the library.

In 1900 the community decided to take over the responsibility of the library and citizens voted in a tax of 1 mill on the dollar in property valuation to support the local reading room. By now the room had moved into larger quarters in the First National Bank Building at the northwest corner of Sixth and Main Streets. The first Library Board of Trustees was installed and Grace Taber, a local resident, was hired as the first Library Director, serving in that capacity until 1914. 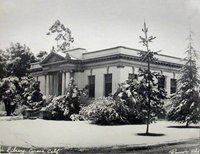 The need for additional space was soon apparent. Using Carnegie Foundation money and additional funds from city coffers, ground was broken for a library building in 1905. This Colonial Revival style building stood on the corner of Eighth and Main Streets serving as the city Library until 1971. When the building opened with 3,000 volumes in its book collection Corona’s population was 2,200.

In 1971, when the city’s population reached 21,000 and the Library held some 53,000 books, a new 19,000 square foot facility was opened at Sixth and Main Streets. Corona joined the California growth spurt of the eighties; space (for books, people and cars) at the Library again became a concern and in 1988 local voters passed a general obligation bond of 7.4 million for library expansion.

Those bond funds, supplemented with additional city monies, built the present facility of 62,000 square feet on the Sixth and Main Street site. Corona’s population was 92,000 on June 26, 1993 when the building was dedicated.

Today Corona Public Library serves a city of over 165,000 and circulates over 500,000 items each year. The Library’s services have expanded to include U.S. Passport Services, notary, online tutoring, test proctoring, small business consulting, and Fair Housing assistance. In the last year, the Library hosted more than 629 programs, tours and class visits with 23,522 attendees. The rich variety of collections, services, and outreach programs reach over 400,000 people, and fit the city’s motto:  To Cherish Our Past and To Plan Our Future.
View Full Site
Ask Ally
Powered by AboutXtreme