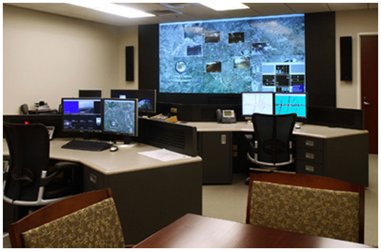 The City of Corona utilizes an Advanced Traffic Management System (ATMS) to monitor traffic throughout the City, and make adjustments to the traffic signal system as necessary from the Traffic Management Center (TMC). The TMC is located at City Hall on the 2nd floor in the Public Works Department.

The TMC was designed and built when Corona City Hall was constructed in 2005. Since then, over $2 million in state and federal grant funds have helped expand the ATMS to include over 70 traffic signals, 15 traffic monitoring cameras, and a video and data link between the CalTrans District 8 TMC in San Bernardino.

The ATMS and TMC are tools that assist in moderating congestion on local streets. From the TMC, staff can monitor traffic on local streets and freeways. Traffic signal timing can be adjusted, which can have a positive impact on traffic flow. Soon a plan to automate the response to high traffic demand with a "traffic responsive" system that reacts to ever changing traffic patterns will be implemented.

Corona is a leader in the traffic industry, being among the first in the state to join a collaboration effort with CalTrans. During non-routine traffic congestion, CalTrans has agreed to allow Corona to override the timing of the CalTrans traffic signals at the bottom of the freeway ramps. This will result in a seamless response to traffic congestion to the motorist, and allow traffic to filter off the freeway onto Corona's local streets around an incident and back on to the freeway more efficiently.

Corona's ATMS and TMC have been recognized by the American Public Works Association's (APWA) Inland Empire and Southern California Region as Project of the Year 2006; the Press Enterprise; Corona's Chamber of Commerce, and CalTrans Headquarters. Contact the Corona TMC at 951-739-4-TMC (951-739-4862).

To contact the City of Corona Traffic Engineering please call us at 951-736-2266, e-mail us at Traffic.Eng@CoronaCA.gov, or use the online Public Works Service Request Form