History of the Corona Fire Department 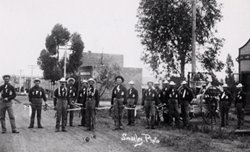 On July 13th of 1896, the City of Corona (formerly known as South Riverside) was legally incorporated and became part of the newly developed Riverside County. A thriving citrus industry quickly emerged producing grapefruits, oranges and lemons, which brought many new residents to town. At that time, the majority of residents lived within or near Grand Boulevard. On January 26th, 1898 the Corona Volunteer Fire Department was officially organized with B.E. Savory named as the first Fire Chief. Their mission was “the prevention and extinction of fires and the protection of life and property”. Later that year, Fire Station #1 was built to house Hose Company #1 at 717 S. Main Street after the city paid the First Baptist Church $144.30 for the land and allocated $300 for the construction of the wooden building. The wooden fire house also served as the City Hall.

The hose cart required 8-10 men to pull, this was especially difficult if the emergency was up hill. Citizens were encouraged to respond with a horse, or later with engine powered vehicles to help. The first person to hook up was compensated for pulling the equipment to the fire scene. Firefighters were initially paid 50 cents per fire and were predominantly local business owners and active citizens. In 1898 there were only six fire hydrants in town, and with only 300 feet of hose, fire fights were challenging and often unsuccessful. Hotel Temescal, on the corner of Sixth and Main Streets, was the location of most of Corona’s social functions. On the night of November 23, 1899, the new department experienced its first major fire on the second floor of the three story Hotel. The Firemen laid their hose and attempted to extinguish the flames, when a passing hay wagon ran over the hose, causing it to split in two. Without any water, all the fireman could do was salvage some of the furnishings before watching the hotel burn to the ground. The total loss of the Hotel Temescal was estimated at $14,000. 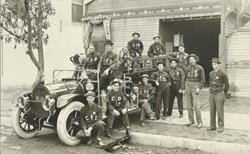 On October 31, 1911 a bond issue was approved by voters which allowed for the construction of a masonry city hall building, improvement of city roads and the purchase of a gasoline engine-powered fire truck. The new concrete building housed all government offices including the fire station and police department. The photo on the left shows the department with their new 1912 Pope-Hartford chemical fire truck which was taken in the spring of 1913 at the old fire station #1.

The City Council hired two paid drivers to drive the new apparatus. Seated in the right seat at the wheel in the photo above is Art R. Blodget who was appointed in December of 1912. Sitting next to Blodget in the derby hat is Perle Glass who served with the department for over 50 years. Standing on the far right is Fire Chief B.E Smith. The Pope Manufacturing Company of Hartford, Connecticut also manufactured bicycles and automobiles prior to making trucks. The Pope Hartford Fire Truck had a water tank and used a system which mixed sulfuric acid and bicarbonate of soda. The chemical reaction of the soda and acid created carbon dioxide and the pressure of the expanding gas expelled the water in the tank out of the fire hose.

An Ahrens Fox fire engine was purchased in 1923 and was the departments first “pumper”. The fire pump was a piston pumper with a large pulsator sphere on the front. This chrome sphere served as a pressure regulator that helped smooth out pressure fluctuations, providing a steady flow of water. At the time, the Ahrens Fox fire engine was state of the art and today is one of the most sought after antique fire engines. Seated in the photo on the right is young Gene Hughes who's father was an Officer for the Police Department. This photo was taken on the apparatus driveway of the south side of City Hall which faced Eight Street.

For more information on the history of the Corona Fire Department, or to inquire about on-going historical projects, please contact Fire Headquarters at (951) 736-2220. 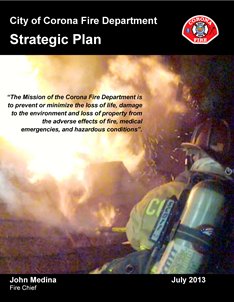 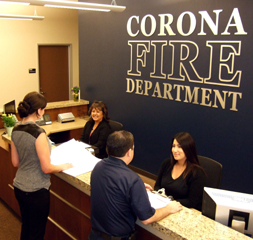 The Fire Department Operations Division provides protection for our citizens and visitors with a full service response force. This includes protection of life and property from the destructive forces of fire and the protection of life, environment, and property from hazardous materials releases. It also provides advanced and basic life support at medical emergencies, participates in search and rescue operations, responds to catastrophic events, and provides other life saving measures as needed. This division also provides mutual aid throughout the State and automatic aid and contractual aid with surrounding communities.

Are you interested in becoming a Firefighter? Learn about obtaining a career in the Fire Service.

"Providing a partnership between the community and the Corona Fire Department
to expand public safety for the citizens of Corona."
The Corona Fire Safety Foundation is a non-profit benefit corporation formed in November, 1998. It is organized under the Non-Profit Public Benefit Corporation Law for charitable purposes. Its board members contribute personal knowledge and expertise, act as advocates for the organization in the community and contribute knowledge of community issues and matters related to the organization.
Click here to learn more about the Corona Fire Safety Foundation
View Full Site
Ask Ally Refresh