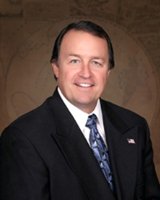 Jason shared his life for 30 years with his wife Dee until her passing in February 2017 when she died of pancreatic cancer following a two-year battle. They have two daughters. Sharlynn is married to Jon, and they have two kids Samantha and Jack. Cherise has two daughters Tylor and Savannah. Cherise is also a teacher in the Corona-Norco Unified School District.

Jason reconnected with Karen (Henderson) Wuflestad after the two had not seen or spoken to one another for over 37 years. They can now be seen together at many community events. Karen was born in Corona, attended Corona schools, and graduated from Corona High School. She is a school counselor.

Jason still enjoys playing basketball with friends, a tradition that began about 40 years ago with six friends, and has grown to over 30 participants each weekend. Traveling and enjoying time with family and friends are things he loves.