The City of Corona is in the process of preparing an update to the General Plan. The General Plan is a long-range policy and planning document that will guide the development and resource management of our City.

The public draft of the General Plan Technical Update and Draft Environmental Impact Report (EIR) is now available. The documents can be viewed on the City’s General Plan Update webpage at www.CoronaCA.gov/GPUpdate.

The public comment period on the General Plan Draft EIR begins December 19, 2019 and ends on February 3, 2020. Comments on the Draft EIR can be emailed to GPUpdate@CoronaCA.gov or mailed to: 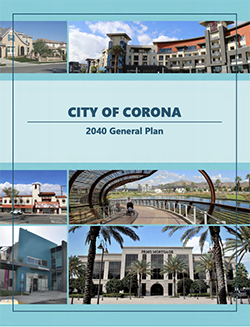 About the General Plan Update

The City of Corona began preparing the update to the 2004 General Plan in 2017. The proposed update is a technical update to the General Plan and required the preparation of new technical studies to the circulation element, noise element, environmental resources, and public health and safety. The update also addresses new state laws and regulations enacted by the state legislature. It encompasses updated transportation and traffic modeling based on updated existing conditions as well as projected future growth. The update will not change the land use of properties but will update the Land Use Map to include General Plan amendments that have been approved since 2004 and correct any inconsistencies discovered in the update process. The technical update will respond to the new laws and to effectively address growth, ensuring that the vision and value of Corona remain relevant.

To learn more about the City of Corona’s General Plan Update, click here.