The Corona Historic Preservation Society (CHPS) invites you to a special screening of H.G. Wells "The War of the Worlds" (1953) starring Gene Barry and Ann Robinson. The movie will be presented on Saturday, Sept. 14, 2019 at the Starlight Theater at Dos Lagos, beginning at 10:30 a.m.

The IMDb summary for the 1953 version of this film says ”A small town in California is attacked by Martians beginning a world invasion.” Shots of downtown Corona were featured in the opening scenes with the UFO alien craft passing through the night time sky. Other film locations at Paramount Studios and in California and Arizona were also identified. Filming took place in January of 1952, and its release was in Spring and Summer of 1953.

Bill Rosar and Robert Skotak, two film historians, will make presentations before the screening and will answer audience questions.

Bill Rosar comes to Corona as an author, educator, and lecturer. With an academic background in motion picture production, music and psychoacoustics, he has taught the history and analysis of film music at USC’s Musicological Society, Society for American Music, American Music Library Association, and the Musicological Film Studies Symposia at California State University, Long Beach. Contributing chapters to books on music in the films of Orson Welles and Alfred Hitchcock, he is also a leading expert on the history of music in Universal Pictures and is currently writing a book on the  for the classic Laemmle horror films, The Music that Made the Monsters. He is editor of the Journal of Film Music, the first academic publication devoted to the subject.

In collaboration with film and TV composers and other members of the motion picture industry Rosar founded the non-profit Society for the Preservation of Film Music in Los Angeles. He has also served as a research consultant to composers and movie studios, including Paramount, Columbia, and Universal, as well as to recording companies releasing classic film scores on CD.

In the field of vision science and telerobotics, Rosar previously worked at the California Institute of Technology and NASA’s Jet Propulsion Laboratory in technology development for the U. S. Space Station. He is currently a research associate in the center for Brain and Cognition Lab at the University of California, San Diego, where he studies the perception and cognition of film music.

Robert Skotak has been involved in Hollywood filmmaking for decades and has won Academy Awards for Best Visual Effects for the movies Aliens and Terminator 2: Judgment Day. He also won BAFTA Awards for the same two movies. Mr. Skotak is also a noted film historian who has written dozens of articles for "Famous Monsters", "Filmfax" and is the author of a biography of science fiction writer/director Ib Melchior.

This is a great opportunity for all Coronans to see a film featuring scenes of our Downtown as it appeared 67 years ago, by joining us to view The War of the Worlds on the BIG screen.

Admission is free to current members of the Corona Historic Preservation Society (CHPS) and only $5 to all others. Membership in the CHPS Facebook Group does not qualify as being a member of CHPS. Purchase your tickets online at https://chpswaroftheworlds.eventbrite.com. 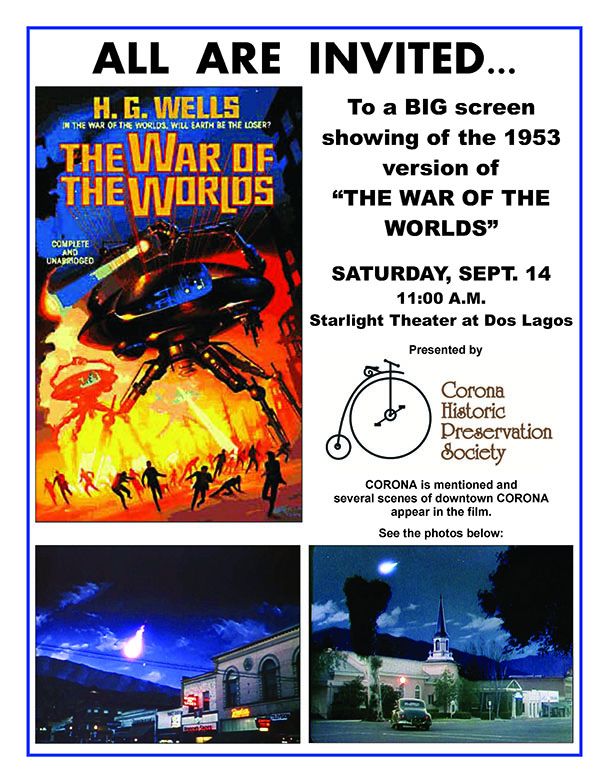