Corona CA – It is with a heavy heart that the Corona Police Department must let our community know the missing child investigation regarding Noah McIntosh has been escalated to a homicide case. Our department has presented a case to the Riverside County District Attorney’s Office against Bryce McIntosh for the murder of Noah McIntosh. Jillian Godfrey remains in custody on child abuse charges, and her bail remains $500,000. We would like to assure our community members our department has put all our efforts into locating Noah McIntosh while gathering the facts regarding his disappearance. Our search for Noah continues. 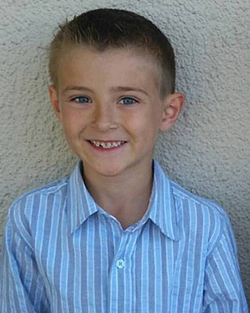 Jillian advised she had not been able to contact Noah for almost two weeks.  Officers attempted to contact the father, Bryce McIntosh, at the address above; however, he did not answer.  On March 13, a search warrant was authored and served at Bryce’s apartment. The evidence discovered provided detectives probable cause to arrest Bryce McIntosh and Jillian Godfrey for child abuse. The evidence also led investigators to several locations throughout the county including Temescal Valley, Aguanga, and Murrieta.  The subsequent search of these sites delivered evidence at each of these locations.

We understand there are many questions regarding the details of the investigation and evidence found. To preserve the prosecution and integrity of the case, further details will not be shared.

The Corona Police Department is thankful for the collaboration and assistance of local, state, and federal law enforcement partner agencies. Specifically, we would like to recognize District Attorney Mike Hestrin and his team for their support. DA’s Chief of Investigators Joe DelGiudice provided significant investigative resources. Riverside County Sheriff Chad Bianco made available search and rescue teams and specialized canine teams to facilitate searches in difficult terrain. FBI Special Agent in Charge Voviette Morgan provided evidence collection resources and agents to assist in the investigation. Most importantly, we would like to graciously thank our Corona community for the outpour of support with the blue ribbons throughout the city and the prayer vigil held last Sunday.

The Corona Police Department will continue to investigate the disappearance of Noah McIntosh and will remain steadfast until Noah is located.

At this time, we ask our community to reflect back to February 20 through March 12. Any community members that may have seen Noah, suspect Bryce McIntosh, his vehicle a black BMW 330i, CA license 5MKE807, or Jillian Godfrey are asked to contact Senior Detective Mario Hernandez at 951-279-3659 or Mario.Hernandez@CoronaCA.gov.