"The tragedy of Route 91 still resonates with the Corona community and all concert music lovers. We morn and remember several Coronans who lost their lives that day. With this candlelight vigil, the City of Corona will remember everyone who lost their lives and the survivors who still live the trauma of October 1, 2017," said Mayor Jason Scott.

"We are grateful for the partnership with K-FROG on this year's candlelight vigil. Corona is #CountryStrong," said Scott.

K-FROG will provide a limited amount of candles, please feel free to bring your own. The City of Corona is honored to host K-FROG and the community at Remembrance Field for our Country Strong community. The community is encouraged to attend. 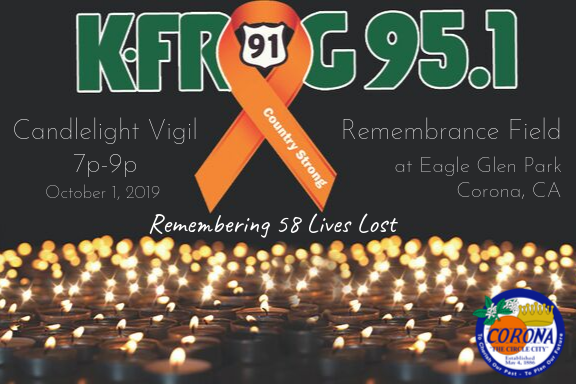 K-FROG, the Inland Empire’s Only Country Station, recently expanded its reach to 93.1 JACK FM (KCBS-HD2) in Los Angeles.. Listeners can tune in to K-FROG (KFRG-FM/KXFG-FM) in Riverside on air, as well as nationwide on the RADIO.COM app and website, KFROG.com. Fans can also connect with the station on social media via Twitter,Facebook and Instagram at @KFROGRadio.

K-FROG is a RADIO.COM station. RADIO.COM, the fastest growing digital audio app in the United States and the current leader in local sports coverage, currently has over 300 stations and more than 10,000 podcasts, with more added continuously on its rapidly growing platform. RADIO.COM is a part of Entercom. Entercom is a leading media and entertainment company and one of the two largest radio broadcasters in the U.S.

About the City of Corona:
Corona is located adjacent to Orange County California at the junction of the 91 and 15 freeways with a population of more than 160,000 residents. For more information regarding the City of Corona visit www.CoronaCA.gov